I got so excited about the magic that is Universal Studios that I forgot to talk about last night. Was just planning on having a quiet night at home but was reading through twitter feeds and saw something that caught my eye. Someone who I was desperate to meet was going to see Steel Panther at House of Blues. I had such a rad time there last week that M convinced me to go again. I jumped in a cab at around 9:30 and headed out to get my metal on. Horns up!

Saw a couple of support bands and met a bunch of Aussies from a band called Atlantis Awaits who are recording in LA at the moment. They were a bunch of nice dudes (and chick) and I had a cool chat. And then the mighty Steel Panther came. And destroyed. And who was just behind me for most of the show. Kat Von D. Got to say hi and get a quick photo. Absolutely stunning in real life.
Mad night. I heart LA. 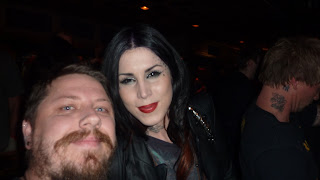 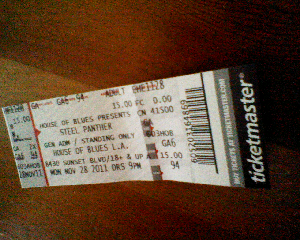