Disneyland is done and all merched up

The theme park part of our trip is done. I have to say. 3 days straight of Disneyland is hard going, even for an adult. Although I am beyond happy that we did it. Started the day with breakfast at IHOP, where everything is served with pancakes on the side. So good. Bacon, three eggs, sausages, French toast and two buttemilk pancakes. Getting my fat on today.

I never thought we would be that family, yet two hours later, here we are with three huge bags of Disney stuff, all merched up. I settled on some classic Mickey ears with my name on them and a Nightmare Before Christmas hoodie. Everyone else got some ears too with various other bits of stuff. M got a nice Mickey watch.

We then headed back over to California Adventure Park to try out the roller coaster. Unfortunately it was not working again. We then watched a show called Disney Rocks, where I found out that Disney did not really rock at all. Although the kids had a good time. Hit up a few small rides including a small roller coaster called Goofys Sky School. Actually turned out to be the scariest ride of the whole week. We then watched a show called Mickey's Dance Crew where Mickey busted out some hip hop moves and basically just kicked ass. Brilliant.

We ended the day the same way we started Disneyland, with another go at Space Mountain and Star Tours. Z has finally conquered his fears on the rides and wanted another crack at Space Mountain. Funniest comment of the day, courtesy of Z. It went some thing like this:
Z: Where are we going?
Me: To go to Space Mountain and get another fast pass for Star Tours.
Z: We wouldn't have time to go on the Star Wars ride again would we?
Me: What do you think the Star Tours ride is?
Slight pause while Z pulled a fist pump then came out with this gold.
Z: YES! If we were on a trampoline when you said that I would have done a flip!

Heading back to Vegas today to see a few more things that we missed the first time round. 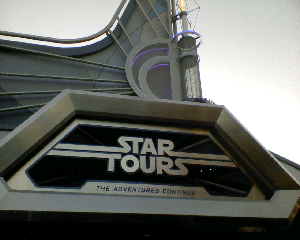 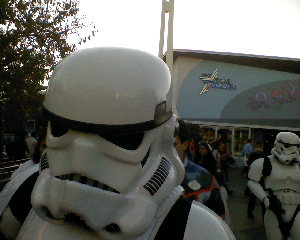 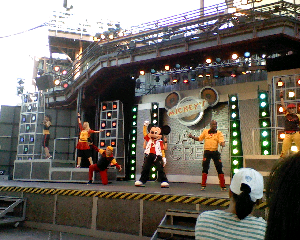 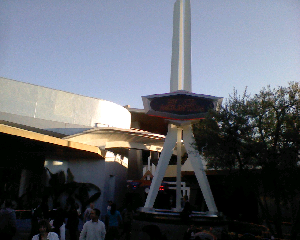