Guess where we are? Flight from LA to NY was actually pretty good. We splashed out and payed the extra $2 each for plastic headphones which has easily been the best $10 I have spent so far. Apart from an inappropriate amount of Adidas track pants I have bought so far for ten bucks each.

After working out the best way to get to our hotel, NYC Cab baby, we cruised through some hard core traffic and made it to our hotel in Hell's Kitchen. Quick bag drop and hit the streets for some dinner. M and L settled on some indian while the rest of us are pretty keen for our first New York slice. Fat Sals was the lucky devil to pop my NY pizza cherry. Verdict. Delicious.

After we had dinner we had a pretty rough night with the weiner patrol. I was seriously looking up flights back to Australia and working out how much we would lose if we came home early. Not even joking. Last few days have been very tough. We missed out on Jon Stewart tonight because we were too scared to leave the kids with baby sitter because of their behaviour. Luckily we still have some backup tickets in January.

Spent this afternoon walking around Times Square witht the kids eating giant pretzels, and browsing shops, while the warden slept. Pretty crazy place. So busy and rushed. No one watches where they are walking and if you're not watching, they just bump into you and keep going. On the way back to the hotel we stumbled into a giant protest which was pretty full on. Cops everywhere. Kept walking in case that shit got ugly. A few minutes later we came across on of the coolest things I have ever seen. A break dance crew. About to dance in the street. We watched them for about fifteen minutes, and it was completely amazing. So much fun.
Anyway, have to get ready. Hopefully we can last the next four days in a bus. 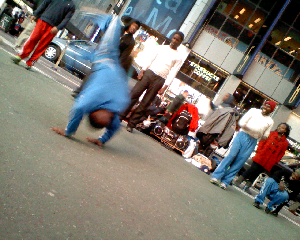 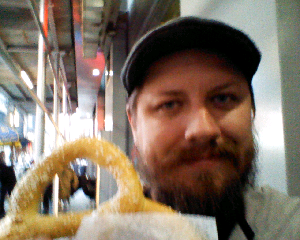 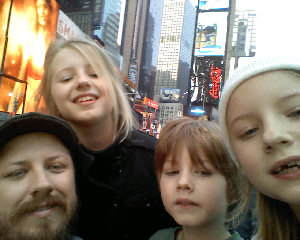 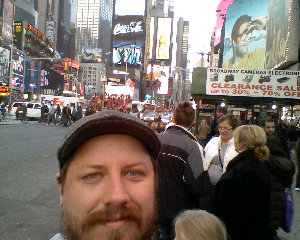