OK Philly rules. Hard. Haven't figured out how to describe the differences between NY but they are many. Every city we have been to has had a completely different feel to it but the differences between east and west coast are huge. 2 hours from NY and it is still a completely different city. NY is so busy, all the time. The city that never sleeps. Philly is still east coast, but not as busy. The architecture and buildings here are completely amazing. It's so cool to meet people that love their country/cities so much. It just doesn't happen very often in Australia. Not that I don't love Australia. I'm definitely missing the summer, swimming, BBQs and cold beers. But I also love this country, that everyone seems to hate.

Since the warden was incapacitated the day before, we decided to hit the market again so she could see what all the fuss was about. She opted for some kind of fried oyster situation, while I couldn't go past another Philly Cheesesteak. Quickly becoming my favourite thing ever. So beefy and tender and perfect. There is nothing in Australia that compares.

Since being here, I have fallen in love again with basketball again in a big way. This time I thought I would involve the family, and bought tickets to see the Philadelphia 76ers for all of us. Tickets were way cheaper than Knicks, and we got free hotdogs and sodas. Atmosphere at the Wells Fargo Stadium was nothing compared to the atmosphere at Madison Square Garden when the Knicks played, but the 76ers are having an amazing season this year. The kids had a rad time cheering, watching and dancing their asses off. Particularly Z. Brothers got some moves, and he's not afraid to show them. In fact he was busting some extra moves and was most disappointed that he wasn't on the big screen for being a super fan. Was an awesome game and went into overtime although the Denver Nuggets came away with the win. Disappointing and both Belle and I came away with barely any voice left.

Today M was taking the kids to the Please Touch Museum which was supposed to be a rad place for kids. I was keen to hit up the bar owned by Mac and Sweet Dee (Rob and Caitlyn from Always Sunny in Philadelphia). We went to the Reading Terminal Market for brunch again. Cheesesteak time. Tried a different vendor today. So awesome. Hard to decide which one has been the best, but if there were cold beers available, I would be happy to eat cheesesteaks for the rest of my life.

Walked the extra mile to get to "Mac's Tavern". Place had a cool atmosphere and ended up having a drink with one of the other owners and a dude who was in The Wire. Sunny in Philly pictures everywhere. So cool. Bartender was a rad dude and ended up having a long chat with him about the city. Walked home and the rest of the family got home a few minutes later. Kids had a rad time at the museum so good day all round. Nothing could ruin it. Wait. Yay. Tantrum time. 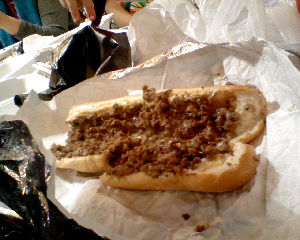 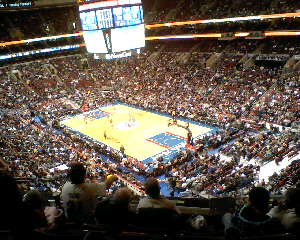 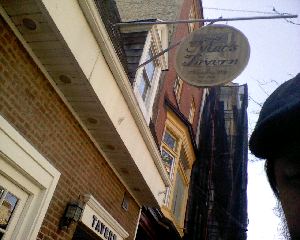 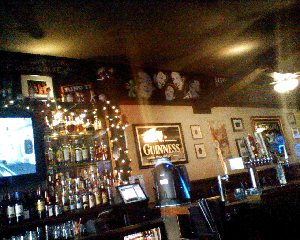